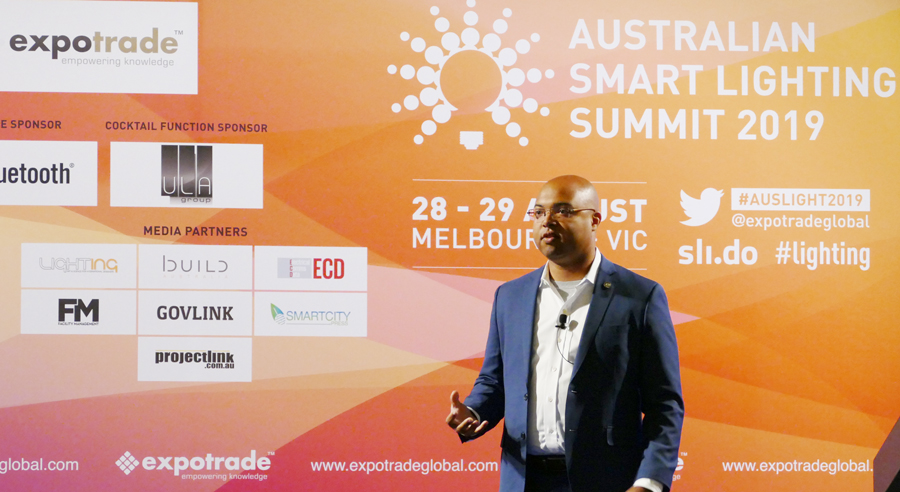 Four international experts travelled down to Melbourne from India, Norway, and the US to apply lessons learned from their landmark lighting projects to an Australian context.

San Diego’s smart lighting upgrade, which saw the largest deployment of IoT in a North American city, was used as a framework to explore the foundational role of lighting within smart city technologies. Intelligent streetlight nodes move far beyond simply lighting municipalities, according to Erik Caldwell, Deputy COO of City of San Diego’s Smart and Sustainable Communities Branch. In fact, they provided City of San Diego with an awareness of how citizens interact with local infrastructure, and even helped solve a shooting-related crime.

Katia Valerie Banoun, Lighting Europe board member and Managing Director of Norway lighting body Lyksultur, stressed the importance of smart lighting projects that focus on the citizen from the forefront. In exploring Norway’s influence on the European lighting industry, Banoun highlighted the need for a more holistic approach to light, stating that humans ultimately need the right light at the right place at the right time, regardless of its accompanying technology.

Back in the US, the Los Angeles LED Conversion Program saw the replacement of ‘cobrahead’ streetlight fixtures, some of which were over 100 years old, to energy and cost saving LED fixtures.

City of Los Angeles Bureau of Street Lighting Assistant Director Kerney R Marine unpacked the Program’s status as a lead-in to a smarter Los Angeles, through the pairing of smart technology with infrastructure as a way to improve services for citizens. Marine explained the need for coordinated engagement with outside stakeholders to effectively see this pairing through to fruition, avoid duplication of effort, and ultimately to encourage innovation.

Innovation was the name of the game for India’s Street Light National Program (SLNP), which has brought down the cost of energy-efficient lighting while introducing automation to India.

Santosh Thakur, General Manager of Energy Efficiency Services Limited India (EESL) explored the challenges and intricacies of the streetlight to LED program before exploring what’s next in South Asian smart lighting deployment – a replication of the SNLP in countries including Myanmar and Maldives, and a provision of similar services in rural India. To date, more than 2 million LED streetlights have been installed in Indian villages.

Australian councils, practitioners, suppliers, and even scientists and astronomists coloured the Summit program with a range of complex Australian perspectives on the state of smart lighting Down Under.

Peter Tsokas, Chief Executive Officer at the City of Unley unpacked his council’s LED lighting roll-out. The first council in South Australia to supply their own lighting fixtures to SA’s power network rather than the other way around, Tsokas spoke candidly about the roll-out, admitting that councils are often unwilling to reveal what didn’t work within their smart lighting deployments. This lack of transparency means other councils don’t have a framework to learn from.

Describing City of Unley’s project as “a real-life example with the bruises to prove it”, Tsokas advised that councils should:

Effective citizen communication was further explored in Adam Beck’s presentation on the role of smart lighting as a foundation for smart cities. Executive Director of Smart Cities Council of Australia and New Zealand, Beck brought the concept of the National Digital Twin into the smart lighting conversation. Drawing upon this concept as a tool for directing investment in highly sustainable infrastructure and citizen services, Beck explained that lighting practitioners have a fundamental role to play of the development of an Australian National Digital Twin.

With other speeches centred around ‘healthy’ light within smart city contexts, working within tight budgets when seeking to make cities smarter, and even the impact of artificial lighting pollution on nocturnal mammals, the 7th Australian Smart Lighting Summit was a diverse, knowledge-packed event. Speakers, sponsors and attendees alike contributed to a discourse on realising smarter, safer, healthier cities, through transparent smart lighting deployment that places the citizen at its forefront.

The 7th Australian Smart Lighting Summit took place on the 28th and 29th of August at the Melbourne Convention & Exhibition Centre.

Expotrade is a global conference and event organizer with its head office based in Melbourne, Australia. Expotrade has delivered some of the largest, most successful B2B industry conferences and events in the areas of infrastructure, major projects, sustainability, technology & architecture. For over 10 years, our unique blend of knowledge, experience and flexibility has accomplished an array of consistently top-quality events. Today, Expotrade events enjoy such a distinctive edge, they are amongst the best patronised in the calendar.